Writing at Length: Why Longer Financial Copy Can Be Better

Brevity may be the soul of wit, but it shouldn’t be a copywriter’s sole concern.

Investment writers often struggle for space. The word limits imposed by clients or house templates can be strict and sometimes arbitrary. Once, when I worked at an investment firm, I was told that certain clients were unhappy with how little text they were receiving in their monthly reports. Those clients had forgotten that they’d asked for those reports to contain no more than 360 characters – including spaces!

Such circumstances leave little room for flair or flow. For the most part, though, it’s worth giving a market commentary or thought-leadership piece some breathing space.

Many experts advise doing the opposite, of course. In general, Orwell’s famous injunction to cut words wherever possible is sound. Like most good advice, however, it shouldn’t be followed slavishly. Orwell doesn’t always follow it himself. Look at his famous six rules (from Politics and the English Language):

(i) Never use a metaphor, simile, or other figure of speech which you are used to seeing in print.

(ii) Never use a long word where a short one will do.

(iii) If it is possible to cut a word out, always cut it out.

(iv) Never use the passive where you can use the active.

(v) Never use a foreign phrase, a scientific word, or a jargon word if you can think of an everyday English equivalent.

(vi) Break any of these rules sooner than say anything outright barbarous.

Strictly applied, Orwell’s rule iii would excise the word always from itself. And you could shorten it further by replacing the dummy-pronoun structure of the subordinate clause, perhaps by using the second person: “If you can cut a word out, do”. Yet it wouldn’t read so well in the truncated version. Orwell’s version is more natural and conversational than Strunk and White’s celebrated command to “Omit needless words”.

Of the six rules, then, the last is the one that matters the most. When we have to compress text drastically, we’re always in danger of straying into barbarism. If we cut every word possible when we edit our prose, we can end up with copy that is stunted and gnomic. Too many needless words can clog up a sentence – but too many omissions can make it difficult to read. And not everyone wants late-period James Ellroy when they’re reviewing their investment portfolio.

But the case for lengthening your financial copy doesn’t just apply at the word-count level. Editing text savagely can also create structural problems. When reduced to their essentials, a paragraph’s sentences necessarily resolve themselves into simple sentences, each consisting of a single main clause. That’s because it takes fewer words to write a succession of simple sentences than it does to join them together; coordinating or subordinating conjunctions take up a little more space, after all, and that space can be reclaimed by cutting them out.

So, when prose is overly compressed, variety is the first victim. One of the simplest ways to spice up your writing is to vary the length and structures of your sentences – following short sentences with long ones, clarifying your meaning with subordinate clauses and varying voice to suit the subject.

And that variety helps. The staccato rhythms of successive simple sentences are all very well, but readers appreciate longer and more complex constructions too. Constructions such as the cumulative sentence – which adds detail through a succession of modifying phrase – or the periodic sentence – which keeps the reader in suspense until the end – depend on length for their effect.

Longer sentences also offer the opportunity for greater precision. A cumulative sentence can hone in on the specifics of what it describes, adding detail, enhancing the imagery and clarifying the content. Less isn’t always more.

But more can sometimes be less. If you boil your sentences down to their simplest form, you may find that you have to keep reiterating the subject – or varying it inelegantly. A single long sentence may thus convey information more succinctly than two or three stripped-down simple sentences.

Nor is it true that financial subjects demand to be written about in short sentences. Some of the best explainers of the market write with length and elegance. Take Michael Lewis, for example. Here are a couple of lovely periodic sentences from The Big Short:

Incredibly, at this critical juncture in financial history, after which so much changed so quickly, the only constraint in the subprime mortgage market was a shortage of people willing to bet against it.

Ever since grade school, when his father had shown him the stock tables at the back of the newspaper and told him that the stock market was a crooked place and never to be trusted, let alone invested in, the subject had fascinated him.

Or there’s Warren Buffett. This is from his 2017 letter to shareholders:

From a standing start 240 years ago – a span of time less than triple my days on earth – Americans have combined human ingenuity, a market system, a tide of talented and ambitious immigrants, and the rule of law to deliver abundance beyond any dreams of our forefathers.

And then there’s Matt Taibbi, who, in Rolling Stone, wrote possibly the most memorable sentence in the last decade of financial writing:

The world’s most powerful investment bank is a great vampire squid wrapped around the face of humanity, relentlessly jamming its blood funnel into anything that smells like money.

Never mind that vampire squids don’t have blood funnels – or indeed drink blood! The sentence is vivid not only because of its imagery, but also because that imagery is given room to develop through its cumulative structure.

Later in the same article, Taibbi sustains his polemic with another nice cumulative sentence:

What you need to know is the big picture: If America is circling the drain, Goldman Sachs has found a way to be that drain — an extremely unfortunate loophole in the system of Western democratic capitalism, which never foresaw that in a society governed passively by free markets and free elections, organized greed always defeats disorganized democracy.

This one has a much more complex structure, given its two main clauses, colon and successive modifiers. But it surpasses many a shorter sentence for vividness and power.

So there are plenty of reasons not to prize brevity above all else in prose, but to allow your ideas room for full expression and to explore the power of longer-form techniques such as the periodic and cumulative sentence, the former adding impact, the latter enabling the writer to drill down into the subject matter, escaping generalities, bringing the specifics into focus, exploring their implications, and revelling in the opportunity to use language to its full effect – though possibly not at quite this length! 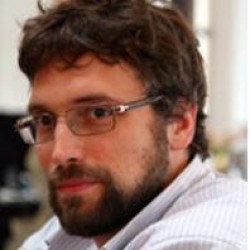 Justin Crozier
Justin has more than 15 years’ experience as a writer and editor. He read History at the University of Oxford and has previously lived in Japan and China. He joined Copylab in 2013.